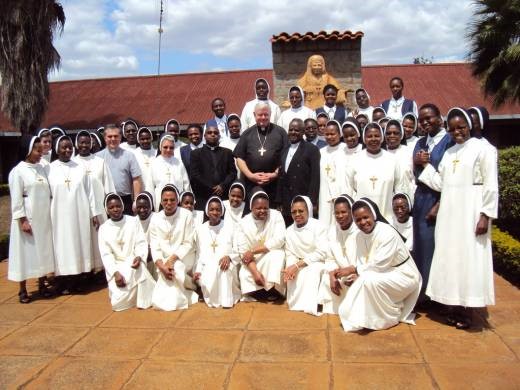 In Warsaw, Bishop Njiru requested one of the Polish bishops to take him to the Franciscan Congregation. He was taken to our provincial house in Warsaw. Sister M. Angelika, the provincial at that time, took this visit as a sign of the times, and together with Sister M. Amadeus, the Superior General, went to Kenya to check the possibilities. The decision was made that five Sisters, chosen from those who had a desire to work there, would go to Kenya.

After some preparation and a language course,these sisters landed in Kenya on May 1, 1983. At first they stayed in a mission in Kyeni in the Meru Diocese, working in a hospital and schools.
About four years later, the Meru Diocese was divided and the new Embu Diocese was created. When Bishop Njiru visited the sisters, he said, “I wanted you in Meru diocese!” (He lost us in the creation of the new diocese.)

As a result, at the end of 1987, two sisters went to the Matiri mission in the Meru Diocese. One of them was Sister M. Elvine Dymnicki from the former Lodi province. The new mission was a very dry, hot and poor place. Sister M. Elvine stayed there for many years until poor health forced her to retire.

Today, the Felician Sisters in Kenya are in the process of becoming a province.

Archbishop Charles Balvo, center, a native New Yorker who is now apostolic nuncio to Kenya and South Sudan, joins a community of Felician Sisters at their residence in Embu, Kenya.