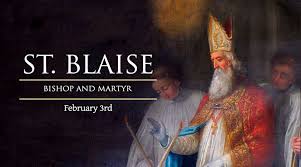 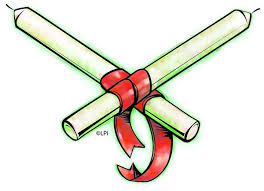 St. Blaise enjoyed widespread veneration in the Eastern and Western Churches due to many cures attributed to him. According to tradition, he was Bishop of Sebaste in Armenia and was martyred under Licinius. On this day the Church gives a “Blessing of the Throats” in honor of St. Blaise. From the eighth century he has been invoked on behalf of the sick, especially those afflicted with illnesses of the throat.

We know more about the devotion to Saint Blaise by Christians around the world than we know about the saint himself. His feast is observed as a holy day in some Eastern Churches. In 1222, the Council of Oxford prohibited servile labor in England on Blaise’s feast day. The Germans and Slavs hold him in special honor, and for decades many United States Catholics have sought the annual Saint Blaise blessing for their throats.

We know that Bishop Blaise was martyred in his episcopal city of Sebastea, Armenia, in 316. The legendary Acts of St. Blaise were written 400 years later. According to them Blaise was a good bishop, working hard to encourage the spiritual and physical health of his people. Although the Edict of Toleration (311), granting freedom of worship in the Roman Empire, was already five years old, persecution still raged in Armenia. Blaise was apparently forced to flee to the back country. There he lived as a hermit in solitude and prayer, but he made friends with the wild animals. One day a group of hunters seeking wild animals for the amphitheater stumbled upon Blaise’s cave. They were first surprised and then frightened. The bishop was kneeling in prayer surrounded by patiently waiting wolves, lions and bears.