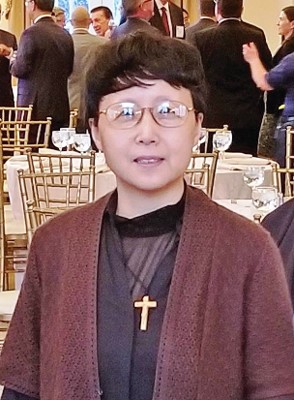 by Sister Dong Hong Marie Zhang, liaison to the Chinese community in the Archdiocese of Newark

Reprinted from The Catholic Advocate, October 14, 2020

I was born in a devout Catholic family in the north region of China. The Catholic history of my family can be traced back to the notorious Boxer Uprising in 1900. My mother told me the story of how her grandparents and other Catholic villagers defended their lives when Boxer slaughters were waving their machetes and coming closer. My father shared the story of how foreign missionaries reclaimed wasteland, started schools in remote areas of north China and brought faith in Christ to people of the land. I was fascinated by those stories.

My father was a seminarian student at a young age. Five Catholic priests and two nuns came from his family. After his seminary was dismissed by the local communist government, my father entered a medical school where he met my mother. Both my parents had worked as medical doctors until they retired in Wuhan.

After more than 30 years of being shut down, the Church in China was reopened in the mid-1980s. The Sunday Mass became very important for my family. It took about 40 minutes for us go to church by bus. The faith seeds were also sown in me through my father’s telling of Bible stories at our family’s dining table. I sometimes wondered how he could remember so many Old and New Testaments stories, but he was truly a good storyteller and made me ponder what was happening in the Bible. Saying the rosary daily had been my family’s tradition for 30 years until my mother died two years ago. I joined my parents’ rosary recitation whenever I was available, since I felt the Virgin Mary was so dear to me.

After graduating from a medical school, I worked as a doctor of internal medicine at a teaching hospital in Wuhan City. Besides taking care of my own patients, I was also responsible for tutoring some medical students. My life got very busy. Many times I felt I was bound to a fast-moving train and just couldn’t make the train stop. My Christian value was in conflict with the atheistic culture around me. Sometimes, I felt two forces tried to tear me down: faith value and secular vanity. The more I hung around with my atheist friends, the emptier I felt. I couldn’t even find a trustful friend to share my thoughts with. One time, I shared my faith with someone I thought was close to me, but she was surprised and asked me, “How could you believe that (God) at this modern time?” Her opinion actually represented that of most atheists then in China: religious belief was backwards and superstitious, and only illiterate and elderly people believed it. It was difficult to make my faith public since the hospital where I worked belonged to the government. My heart was aching, and I was searching for the meaning of my life. After numerous rosary prayers and discernment, I found His call—a call to a different path of life.

I took a leave from my medical career to be a lay missionary in the Philippines for a two-year program. For fear of Chinese government inquiry about my church activities, I pursued a master’s degree in development management at the Asian Institute of Management in Manila through a scholarship.

In fall 2001, I came to the U.S. to pursue a master’s in pastoral study at Loyola University Chicago. In Chicago, I met the Felician Sisters of North America and started my formal discernment for religious life. After nine years, I made my perpetual vows in 2017 in Lodi, N.J. Currently, I serve as the liaison to the Chinese community in the Archdiocese of Newark. My ministry has been involved in spiritual formation, RCIA, Sunday Gospel reflection in Chinese in parish bulletins, evangelization, campus ministry, prison ministry, Protection of God’s Children program in Chinese, and youth program coordination with Asian Affairs of the U.S. Conference of Catholic Bishops.

Even though sometimes there are a lot of challenges on the path of my religious life, with God’s grace, I have been filled with compassion and joyfulness, and my life is meaningful. The spirit of missionary is in me, and I have been inspired by the vision of Felician Sisters: be Eucharist, be sister and be servant to all.

1 thought on “Felician Sister – liaison to the Chinese community”