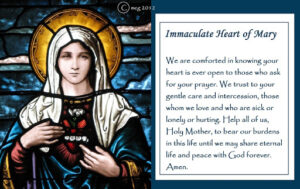 In the 17th century, Saint John Eudes promoted devotion to the hearts of Jesus and Mary. He even composed an Office and Mass in honor of the Heart of Mary. It became a feast of the universal Church only in the 20th century and is celebrated on the day after the feast of the Sacred Heart of Jesus.

The New Testament mentions Mary’s heart only twice. Luke 2:19 says, “Mary kept all these things, reflecting on them in her heart.” Luke 2:51 has a similar text.

Both in Scripture and in later reflections on Mary’s heart, it is obvious that the usage is symbolic. The physical heart stands for the inner reaches of the human personality. It includes or connotes the mind, the soul, the will, the spirit, the core of one’s being. It is the place where a person thinks, remembers, feels, desires, makes decisions. continued