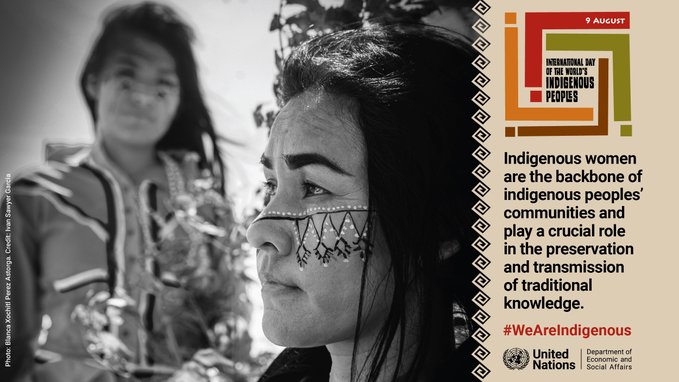 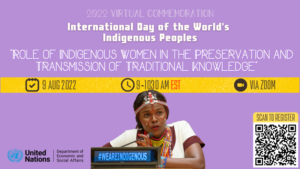 Indigenous women are the backbone of indigenous peoples’ communities and play a crucial role in the preservation and transmission of traditional ancestral knowledge. They have an integral collective and community role as carers of natural resources and keepers of scientific knowledge. Many indigenous women are also taking the lead in the defence of lands and territories and advocating for indigenous peoples’ collective rights worldwide.

The significance of indigenous peoples’ traditional knowledge is widely acknowledged: “Long before the development of modern science, which is quite young, indigenous peoples have developed their ways of knowing how to survive and also of ideas about meanings, purposes and values.” As noted by the Special Rapporteur on Indigenous Peoples, the term “scientific knowledge” is also used to underscore that traditional knowledge is contemporary and dynamic, and of equal value to other kinds of knowledge.

International consultations jointly facilitated by UNESCO and the Internal Council of Science (ICSU) states that “Traditional knowledge is a cumulative body of knowledge, know-how, practices and representations maintained and developed by peoples with extended histories of interaction with the natural environment. These sophisticated sets of understandings, interpretations and meanings are part and parcel of a cultural complex that encompasses language, naming and classification systems, resource use practices, ritual, spirituality and worldviews.”

However, despite the crucial role that indigenous women play in their communities as breadwinners, caretakers, knowledge keepers, leaders and human rights defenders, they often suffer from intersecting levels of discrimination on the basis of gender, class, ethnicity and socioeconomic status. Their right to self-determination, self-governance and control of resources and ancestral lands have been violated over centuries.

Small but significant progress has been made by indigenous women in decision-making processes in some communities. They are leaders at local and national levels, and stand at the frontlines of defending their lands, their cultures, and their communities. The reality, however, remains that indigenous women are widely under-represented, disproportionately negatively affected by decisions made on their behalf, and are too frequently the victims of multiple expressions of discrimination and violence.

The Committee of the Convention on the Elimination of all Forms of Discrimination Against Women (CEDAW) highlighted some of the major issues encountered by indigenous women, particularly noting the high levels of poverty; low levels of education and illiteracy; limitations in access to health, basic sanitation, credit and employment; limited participation in political life; and the prevalence of domestic and sexual violence.

The virtual commemoration will include an interactive dialogue segment with invited speakers, moderated by Ms Rosemary Lane, Acting Chief of the Indigenous Peoples Development Branch – Secretariat of the Permanent Forum on Indigenous Issues. Speakers will share their expertise and experience from their indigenous communities in preserving, reviving, retaining, and transmitting the traditional ancestral knowledge in various fields of communal activities, including but not limited to effective and sustainable climate solutions, use of natural resources, protection of biodiversity, ensuring food security, promoting native languages and culture, and managing indigenous science and medicine. Some of the questions to be discussed are: