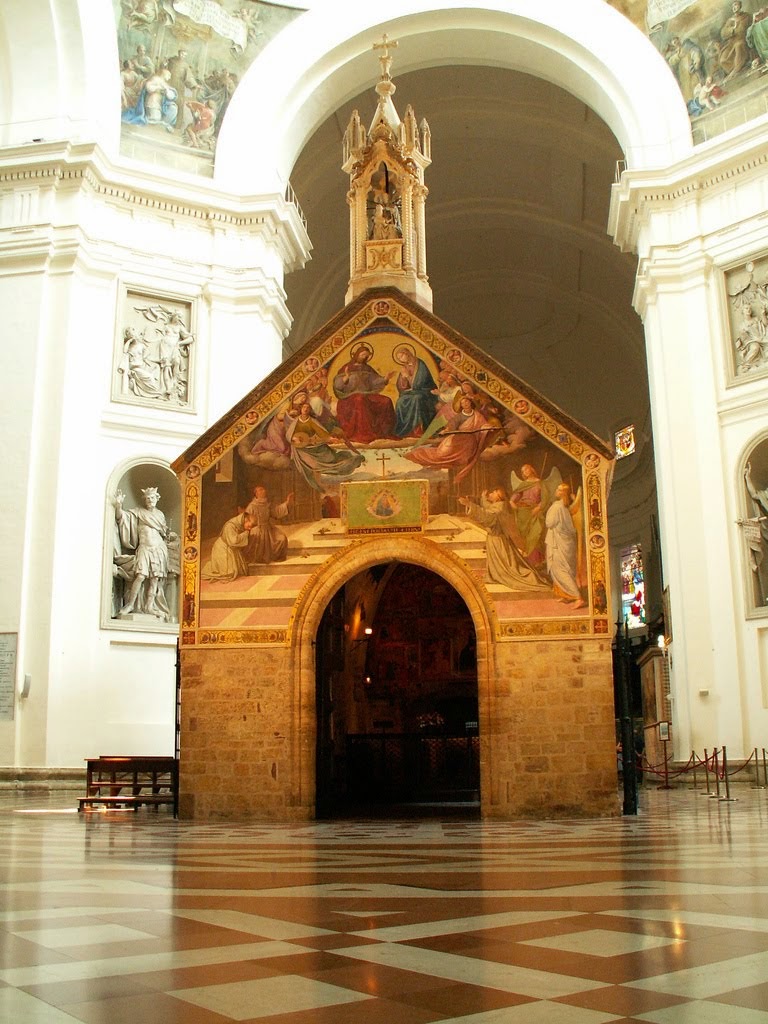 The Feast of Our Lady of the Angels of the Portiuncula

August 2nd, is a special day for all Franciscans, as we celebrate The Feast of Our Lady of the Angels of the Portiuncula. When St. Francis was discerning his vocation, he heard the Lord tell him, “Go and build my church”. Francis taking what he heard literally, went and repaired chapels that were deteriorating. The Portiuncula or the “Little Portion,” dedicated to St. Mary of the Angels was one of the three chapels he repaired. The chapel and the land belongs to the Benedictines for it was given to St. Benedict in the 6th century. However, the friars came to live at the Portiuncula in early 1211. It became the “motherhouse” of the Franciscans. It is now enclosed in a basilica in Assisi and the original structure of the Portiuncula is preserved. St. Francis of Assisi persuaded Pope Honorius III to grant a plenary indulgence to all those who visited the Portiuncula on August 2 and confessed their sins. This indulgence has been extended to all churches, especially those held by Franciscans, throughout the world.

Any visit to Assisi should certainly include this Basilica. When you visit here you will see the small chapel (the Portiuncula) where he lived and where he began the Franciscan Order. The Basilica is actually built over this chapel and dwarfs the chapel itself.

It also contains the cell where Saint Francis died, the Chapel of the Transito. We often wonder what Saint Francis, who emphasized simplicity, must think of this huge Basilica Built over his simple chapel. Regardless, it is a must if you are going to visit Assisi and get the complete story of this wonderful saint

A visitor can also see the “thornless rose bush“. When St. Francis was tempted by the Devil he reportedly rolled in the bush and it turned from a briar bush into a thornless rose bush. To this day there are no thorns on the rose bushes–but only here on this spot.

Here, also, is a statue of Saint Francis to mark the spot where he talked to the doves. To this day, white turtle doves continue to nest in this statue.

The story is told that once while Saint Francis was praying here, Jesus appeared to him and offered to grant him a request. The humble saint asked for a plenary indulgence to be granted to all who, having confessed their sins and visited the chapel. The request was granted on the condition that such an indulgence meet with the Pope’s approval. Pope Honorius III did grant the request on the condition that it only be honored one day each year: August 2nd. It is called the “Pardon of Assisi “ (In Italy it is known as Il Perdoneo di Assisi).