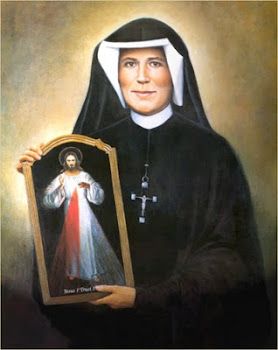 October 5. A Sister of Our Lady of Mercy, Saint Maria Faustina was blessed with unique messages from Christ concerning his mercy and forgiveness. These messages came at a time when many people viewed God as a strict judge. Like Pope Francis, Saint Faustina emphasized the mercy of God. She died in 1938, and was canonized in 2000: a truly modern saint.

WASHINGTON (CNS) — A new film on the life of St. Faustina Kowalska, the Polish nun whose visions of Jesus led to the Divine Mercy devotion, will have a one-night-only showing Oct. 28 on more than 700 screens across the United States.

The 90-minute movie, “Love and Mercy: Faustina,” will also have some features about St. Faustina surrounding it, according to Marian Father Chris Alar, who is seen on-screen during the film.