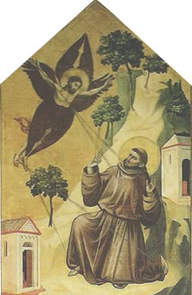 THE CRUCIFIED CHRIST APPEARS TO FRANCIS

On two separate, dramatic occasions, Francis had a vision of Jesus, wounded in hands, feet and side, suffering on a cross. If we look carefully at the two visions we will see them as closely interrelated. Both visions are described in Saint Bonaventure’s Life of St. Francis. It’s helpful to remember that Bonaventure, as a Franciscan theologian and spiritual writer, often described God as a God of overflowing goodness and love.

The first vision happened to Francis shortly after his conversion from a rather worldly life. After that experience, Bonaventure tells us: “One day, while Francis was praying in a secluded spot and became totally absorbed in God through his extreme fervor, Jesus Christ appeared to him fastened to the cross. Francis’ soul melted at the sight, and the memory of Christ’s passion was so impressed on the innermost recesses of his heart that from that hour, whenever Christ’s crucifixion came to mind, he could scarcely contain his tears and sighs.” (continue)