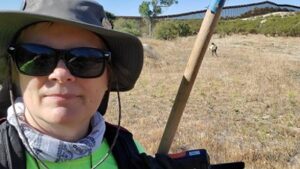 Aguilas del Desierto conducted a search this past weekend, looking for the body of a man missing for several months. S Maria Louise Edwards, CSSF said, “The family had contacted Aguilas a week ago, hoping for closure, because someone had recently reported seeing his body.”  Leaving at 4 a.m. to drive three hours to the town of Boulevard, volunteers began searching around the hill near where the man’s body was last seen.   “As we searched around the side of the hill, something up ahead looked strangely man-made. As we got closer,” noted Sister Maria Louise, “I realized it was the Wall. I had never seen it firsthand, and I didn’t know if I would ever be this close again.  “So, setting the search aside, I started walking toward the dark rusty ‘fence’ that has caused so much controversy and so much loss of life. I wasn’t the only one that felt this way. Soon everyone was leaving the search area to get close enough to touch the Wall.
(continued)