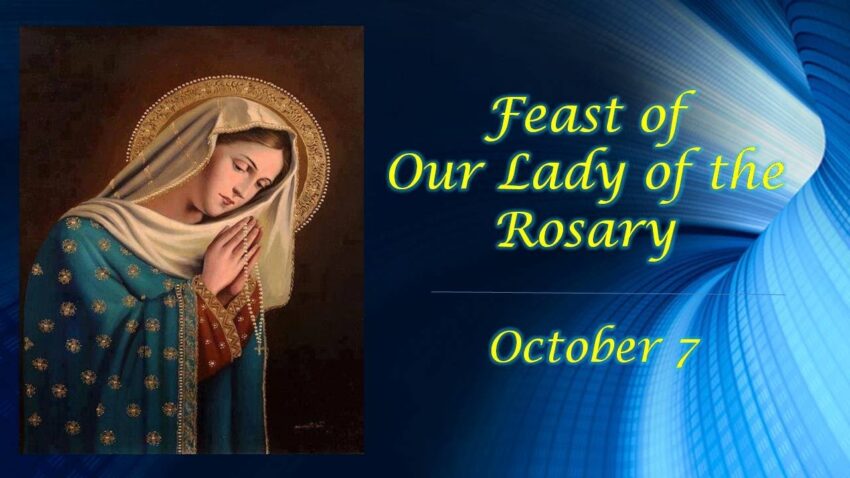 Our Lady of the Rosary

This feast was instituted by Pope St. Pius V in thanksgiving for the great naval victory over the Turks at the battle of Lepanto on this day in the year 1570, a favor due to the recitation of the Rosary. This victory saved Europe from being overrun by the forces of Islam.

Lepanto, perhaps the most complete victory ever gained over the Ottoman Empire, on October 7, 1571, is commemorated by the invocation “Help of Christians,” inserted in the Litany of Loretto. At Belgrade the Turks were defeated on the Feast of Our Lady ad Nives in 1716. A second victory gained that year on the Octave of the Assumption determined Pope Clement XI to command the Feast of the Rosary to be celebrated by the universal Church. Leo XIII added the invocation “Queen of the most Holy Rosary, pray for us,” to the Litany of Loretto. The Feast is in reality a great festival of thanksgiving for the signal and countless benefits bestowed on Christendom through the Rosary of our blessed Queen.

In modern times successive popes have urged the faithful to pray the Rosary. It is a form of contemplative prayer, mental and vocal prayer, which brings down God’s blessing on the Church. It is a biblically inspired prayer which is centered on meditation on the salvific mysteries of Christ in union with Mary, who was so closely associated with her Son in his redeeming activity.